Krzysztof Wodiczko (1943- ), born in Warsaw during the ghetto uprising, is a child of post-war, Soviet Poland. Most famous for his projected images and videos of the human body onto architectural landmarks, Wodiczko’s work centers on questions of the social, interrogating everything from collective memory to economic injustice. In addition to his site-specific work, Wodiczko has also done numerous design projects intended to empower or enable the traumatized or the underprivileged, of which the Homeless Vehicle Project is most prominent. Although Wodiczko has never presented his work in The Kitchen’s gallery or theater, it was through the institutional aid of The Kitchen that he was able to perform a projection on the AT&T Long Lines Building in November of 1984. 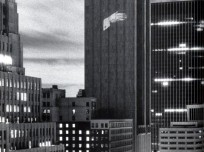