Ellen Fischer is a performance artist whose work combines gestural actions with visual components such as film, shadow play, objects and puppets. She has been a member of The Meredeth Monk Ensemble since the 1970s. Fisher's performance work is informed by ethnographic research in trance dance and rituals of South Asia, particularly Sri Lanka. Since 1981, she has toured solo work throughout Europe and the U.S., also directing large ensemble work reinterpreting myths and legends. She performed as a part of The Kitchen’s 8BC NIghts 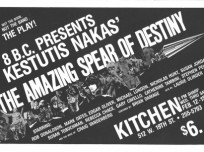