Doug Ashford is a New York based artist, teacher, and writer. The Kitchen presented several of his enamel on metal paintings in 1983 as part of a group exhibition titled, PERSUASION(S). From 1982 to 1996, Ashford's practice centered around his participation in the artist collective, Group Material.The collective dissolved in 1996, but Ashford continued his practice through painting, writing, and producing museum and public projects. Since 1989, he has also taught three-dimensional design, sculpture, public art, and theory seminars at The Cooper Union. Ashford's most recent public effort is documented in the book Who Cares, (Creative Time, 2006), through a series of conversations between the artists and and other cultural practitioners. For more information, please visit: http://www.dougashford.info/ 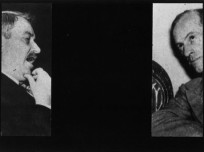