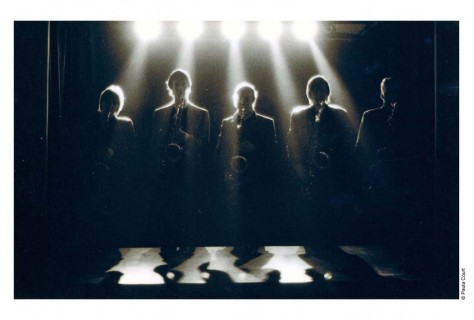 From May 6–8, 1982, The Kitchen presented both parts of Robert Longo’s SOUND DISTANCE, a multimedia work comprising staging, lights, film, and live music and performance. Part I, given the subtitle Sound Distance of a Good Man, included the projection of a film, two wrestlers engaging each other in slow motion, and an operatic soprano providing a soundtrack to the proceedings. A different film projection, marching performers in soldier costumes, and a cacophonous ensemble of drummers, saxophonists, bassists, and a trumpeter made up Part II, subtitled Iron Voices. Together, the two parts of SOUND DISTANCE offered a rumination on the politics of power, dominance, grace, beauty, and eroticism.