Deep Listening Band, a musical group focused on the remedial powers of sound, was established in 1988 by Pauline Oliveros, Stuart Dempster, and Panaiotis. Originated by Oliveros, the concept of Deep Listening draws attention to aural experience through the manipulation of resonance and the use of reverberant performance spaces, encouraging listeners to meditate upon the differences between instinctual and intellectual responses to sound. The group recorded their first album, released in 1990, at the Fort Worden Cistern in Port Townsend, WA in order to take advantage of the space’s extended reverberation-delay. In January of 1995, Deep Listening Band, by then comprised of Oliveros, Dempster, and David Gamper, recreated these natural reverberations with an Expanded Instrument System at The Kitchen, transporting audience-members to a space beyond their modern, Western context. The group returned to The Kitchen in April of the following year as part of Through the Distance: Musical Connections, a performance series co-hosted by The Kitchen, The Electronic Café International, The New School, and Composers’ Forum. 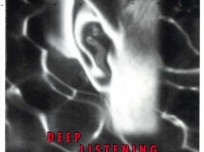