Stuart Dempster (1936 - ) is a performer of trombone and aboriginal didjeridu, as well as an ensemble composer. He is best known for his works Sound Massage Parlor and SWAMI (State of Washington As a Musical Instrument), the former of which was performed at The Kitchen with Deep Listening Band in 1995. Dempster has been the recipient of numerous grants and fellowships including the Fulbright Scholarship in Australia, the Guggenheim Fellowship, and the NEA Composer Grant. Dempster performed at The Kitchen In 1995 and 1996. 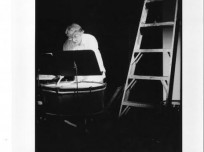