Barbara Barg is an American poet, writer, and musician. Barg studied with the poet Ted Berrigan at Northeastern Illinois University, after which she moved to New York City. From the late 1970s-1990s, Barg actively presented her work as an individual and collaboratively at venues such as The Kitchen, Bowery Ballroom, St. Mark’s Poetry Project, Nuyorican Poets Cafe, Fez, CBGB, and Mercury Lounge, as well as at festivals such as the One World Poetry Festival (Amsterdam) and the International Festival of Poets (Rome). In 1991, Barg and writer Maggie Dubris co-founded the all-woman band Homer Erotic, composed of seven women interested in music and poetry as a performative art, which lasted until 2000. Barg has performed at The Kitchen three times, in 1982, 1982, and 1997. For more information visit http://www.barbarabarg.com/. 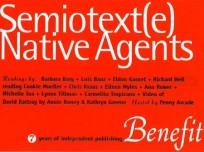