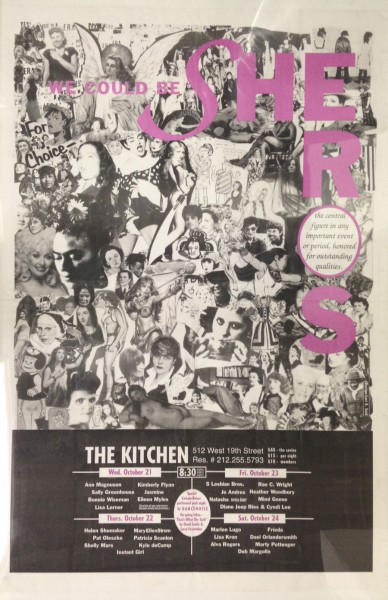 We Could Be SHEROS was a multi-day event held from October 21– 24, 1992, featuring a diverse cast of performers including Ann Magnuson, Eileen Myles, Pat Oleszko, DANCENOISE, 5 Lesbian Bros., and many more. Finding inspiration in other women as role models rather than men, the artists celebrated personal “sheroes” ranging from family members, to celebrities, to other artists, scholars, and thinkers, encompassing any individual who they felt had positively impacted the world.

Each evening showcased seven different performance artists alongside the video That’s What She Said, created by David Leslie and Larry Fessenden. During the performances, members of DANCENOISE acted as curtain-raisers. Bonnie Wiseman’s Shesus served as the opening act of the first night and celebrated Wiseman’s late performance partner, Cathy Combs, who had recently died of breast cancer at the age of thirty-three. In another performance that night, Sally Greenhouse’s unnerving Do No Harm saw her standing behind a television that stood at chest height, projecting a video of a woman giving herself a breast examination. The next night, Kyle deCamp presented her piece LADYLAND, which was based on interviews conducted with ten women who knew Jimi Hendrix and traveled in time from the 1960s through the time of the show. On all four nights, the artists explored a wide variety of performance techniques, including dance, comedy, poetry, singing, acting, and more. The closing act of the final night saw Alva Rogers perform Ovaria From Planet Estrus, in which she asserted that the word “hero” should encompass women as well as men.