Ghasem Ebrahimian is an Iranian born filmmaker based in New York City. Ebrahimian moved to New York in the 1970s and studied film at the State University of New York from 1975 until 1979. In 1980 he co-founded the production company Ebra Films, which produced his first short film, “Willie” (1981), about an African-American boy in Harlem, and went on to produce over forty documentaries for European television. Ebrahimian gained critical acclaim for his first feature length film, “The Suitors” (1988), a darkly comedic story of four Iranian immigrant friends’ experience in New York City, which he wrote and directed. In 1997, Ebrahimian began an ongoing collaboration with the visual artist Shirin Neshat with whom he has created several video installations. Over the years, he has also collaborated on screenplays with writers including Hubert Selby Jr. on “Soldier of Fortune” (1990), and director Taran Davies for the documentary “Journey to Mecca” (2009). Ebrahimian collaborated with three other Iranian-born artists - the visual artist and filmmaker Shirin Neshat, the composer and performance artist Sussan Deyhim, and the writer and filmmaker Shoja Azari - on the multimedia project Logic of the Birds, which took place at The Kitchen in October 2001. For more information visit: https://vimeo.com/user17467937 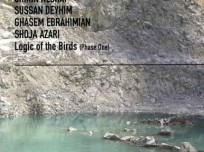