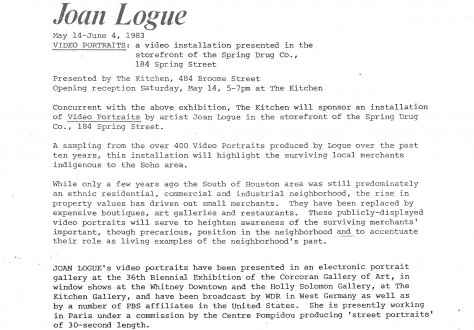 In 1983, The Kitchen organized an installation of Joan Logue’s Video Portraits in the storefront of the Spring Drug Company in Soho. The installation featured a sampling of over four-hundred portraits that Logue had produced in the preceding decade, centered on the local merchants of the Soho area who had survived years of gentrification. Revealing the precarious, yet irreplaceable role they occupied in the neighborhood, Logue’s striking portraits painted the merchants as living examples of a rapidly disappearing past, heightening awareness of those most impacted by the area’s rapid transformation.

These portraits were part of a larger project by Logue called the Neighborhood Series, which spanned from 1972 to 2005. The project’s videos, which ran between ten to twenty minutes each, documented people from communities around the world, ranging from Soho, to the South Side of Chicago, to neighborhoods in France and Spain. As with Logue’s other video portraits, these works reveled in the presence and complexity of their subjects, even when they were the most ordinary of people.