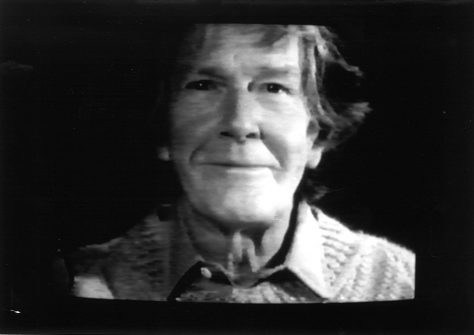 In 1982, The Kitchen co-produced Joan Logue’s first showing of 30 Second Spots, a collection of thirty-second video portraits featuring contemporary artists and composers including John Cage, Philip Glass, Nam June Paik, Laurie Anderson, Liz Phillips, and more. After seeing many of these artists perform live at The Kitchen’s New Music, New York Festival in 1979, Logue wanted to bridge the economic and geographic barriers that prevented widespread access to these musicians. In turn, she decided to create short, distributable “commercial spots” for each of them. These videos were filmed on Logue’s homemade ¾ Umatic-video cart, without special lights or mics. Featuring close-up shots of the artists performing, these videos painted succinct, yet intimate portraits of their subjects.

The 1982 Kitchen presentation of 30 Second Spots was broadcast on television as part of the Kitchen Presents series. Logue continued to work on the project for the next ten years. Searching for new subjects, Logue traveled from New York to Paris, San Francisco, Berlin, and Boston; later video portraits would feature artists and intellectuals such as Pierre Boulez, David Hockney, and Jacques Derrida, as well as non-artistic figures, such as a group of fishermen whom Logue filmed in New England. In 1998, Logue would show a collection of her 30 Second Spots at The Kitchen’s first TV Dinner, alongside several of her other notable works.