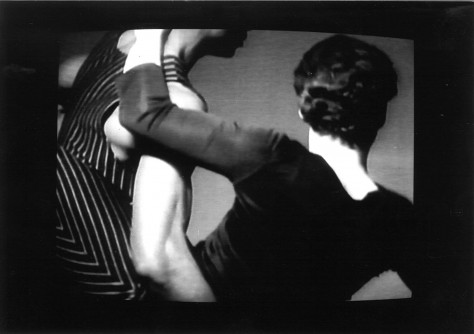 In October 1998, The Kitchen hosted Joan Logue for the first installment of TV Dinner, a series where artists shared their thoughts with an audience over dinner and screenings of their work. Logue presented a series of video portraits from her 30 Second Spots series, a ten-year long project comprised of thirty-second “commercials” featuring artists from around the world. Subjects included John Cage, Philip Glass, Nam June Paik, David Hockney, Jacques Derrida, and more, who were framed performing in intimate, dramatic close-ups. In the program notes, Logue called these videos “my own form of video Haiku.”

The first installment of 30 Second Spots had originally premiered at The Kitchen in 1982 and primarily featured New York artists. In the ten years that followed, Logue expanded the series to not only include artists, but also writers, musicians, and even fishermen from cities like Paris, San Francisco, Berlin, and Boston. The 1998 TV Dinner also included video portraits of Robert Rauschenberg, René Magritte, César Chávez, and Logue herself.