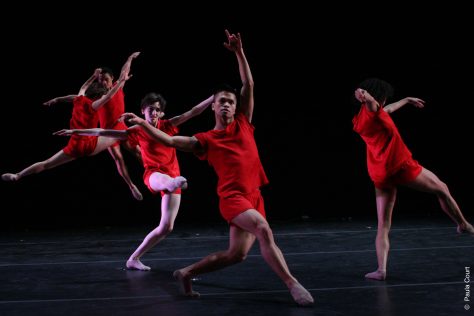 Think Punk! revisited and presented the choreographer’s three decades of work that focused on the deconstruction of classical ballet through the incorporation of punk elements. Three landmark dances from the 1980s were performed by her contemporary ballet company, Armitage Gone! Dance. The first one was Drastic-Classicism,featuring a rock score composed by Rhys Chatham in 1981. Luke Manley and Megumi Eda revived Armitage’s deconstructed and punk pas de deux in Watteau Duets (1985), and Matthew Prescott and Kristina Michelle Bethel performed Wild Thing, which was a set to an original music score by Jimi Hendrix in 1987. Concluding the event, Gone! Dance presented and premiered Armitage’s new choreography, Mashup, that was set to a score by Daniel Iglesia.