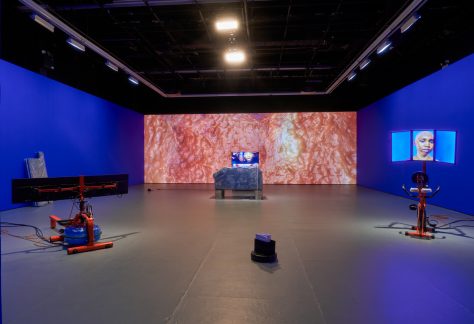 Resident Evil was Sondra Perry’s first institutional solo exhibition. In an installation that tackled themes of technology, identity, and power, Perry’s videos and audiovisual works were paired with sculptural pieces that acted as surrogates for depleted bodies. A Roomba robotic vacuum carried zines around the gallery that contained writing by Hito Steyrel, Hannah Black, and other artists and critics on surveillance, circulation, and illusions of stability. The gallery walls were painted Chroma-key blue, a color often used as a blank space to be activated by CGI special effect. This color evoked what Perry defined as a specifically Black space, one where understandings of Blackness beyond the body could be realized. Perry herself appeared in the installation as an avatar, positioned simultaneously as a producer and surveyor of the body in flux. She actualized the conditions under which bodies are afforded—or forced to endure—hypervisibility. The first-person perspective of computer and video game software, as reified in the 1996 game Resident Evil, which depicts the player’s survival of a zombie apocalypse, served as both inspiration and representation of the rise of surveillance. Throughout the exhibition, Perry posited that Blackness becomes technology, changing and adapting through constant surveillance and oppression. This exhibition was curated by Lumi Tan.