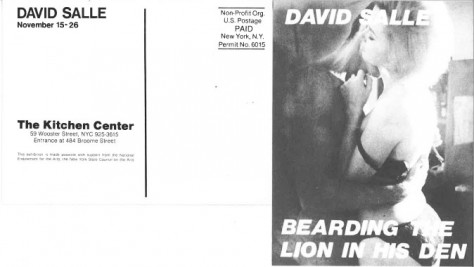 David Salle's Bearding The Lion In His Den was an installation incorporating elements of lights, sound, and pictures, which he than organized into a minimal sequence. The installation consisted of a "setting," designed by Salle, composed of ten high intensity light bulbs and two black and white photographs. A Tim Buckley song played on a tape recorder, which would randomly pause as lights flashed on and off in an "a-b-a" sequence. Salle showed this exhibit at de Appel in Amsterdam before bringing it to The Kitchen.

[PDF]
Press Release: Bearding the Lion in His Den [PDF]