Women of the Calabash is an all-female band that blends traditional and original music, rooted in African, Caribbean, and black American cultures. The group formed in 1978 with original members Madeleine Yayodele Nelson, Tiye Giraud, Theresa Folks Flair, and Ahdmondylla Best. Led and directed by Nelson, the group has performed around the globe. Predominantly, they use vocals and percussion instruments, all natural made, including the calabash. Still performing today, Nelson is the only original member of the group. Women of the Calabash performed at The Kitchen alongside Edwina Lee Tyler in 1984. 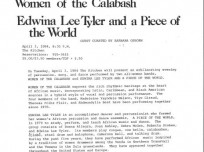