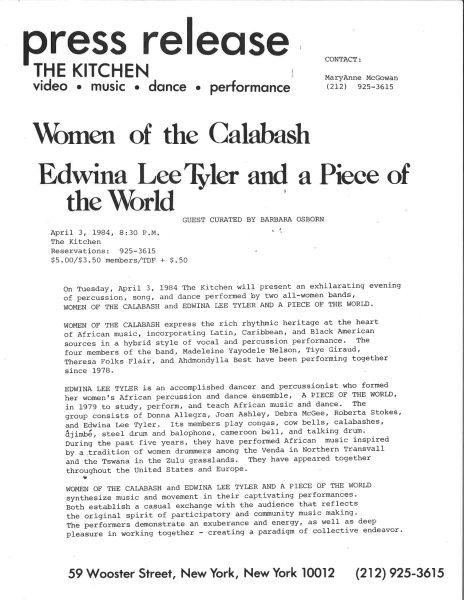 In the spring of 1984, two all-female bands, Women of the Calabash and Edwina Lee Tyler and a Piece of the World, performed at The Kitchen. Both bands combined percussion, song, and dance to recreate traditional African performances. Led by composer and percussionist Madeleine Yayodele Nelson, Women of the Calabash presented songs that incorporated music rooted in African, Caribbean, and black American cultures. They played with all natural percussion instruments, including the calabash, a dried gourd, that is beaded and played as rattles. Edwina Lee Tyler performed with her group, A Piece of the World, playing extended drum pieces and featuring dances by Tyler. Their performance also utilized traditional instruments, including the djimbé, a goblet drum, and a balophone, a kind of wooden xylophone.