Cecil Taylor is an American pianist and poet from New York City. After playing in R&B and swing groups in the early 1950’s, Taylor went on to form a number of jazz groups including a collaboration with John Coltrane in 1958. Working consistently with a number of musicians over the years, most notably saxophonist Jimmy Lyons, Taylor later moved away from the blues influenced jazz tradition and pioneer what would later be called free jazz. Taylor was awarded a Guggenheim Fellowship in 1973, a MacArthur Fellowship in 1991, a Kyoto Prize for music in 2013, and in 2016 his work was shown at the Whitney Museum of American art. Taylor performed at The Kitchen in 1976 as part of the Bosendorfer Festival and in 2004 for an evening entitled Kitchen House Blend. 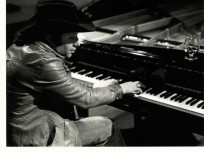