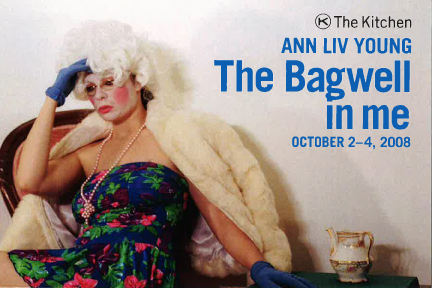 On October 2–4, 2008, Ann Liv Young presented The Bagwell in me, her second performance at The Kitchen after Snow White. The Bagwell in me intertwined fictionalized versions of George Washington’s life with the personal history of Young’s maternal family, the Bagwells, whose lineage has roots in the American South dating back to the 18th century.

Young played multiple characters throughout the piece including both George and Martha Washington, while performer Isabel Lewis played Oney, an enslaved person owned by the Washingtons. Young herself described the performance as a love story between Oney and her child, who was born from an assault by Washington. As stated in the press release, the performance “explored notions of celebrity, chivalry, Victorian manners, Southern hospitality, and racism in America.”

The performance included tap dancing and featured original music by Young, as well as many samples of pop songs by various artists. Additional production support included: sound design by Michael A. Guerrero, Ann Liv Young, and Tei Blow; lighting by James Latzel and Ann Liv Young; and videography by Michael A. Guerrero. The Bagwell in me went on to premiere in Europe at the Copenhagen Music Theatre Baltoppen.