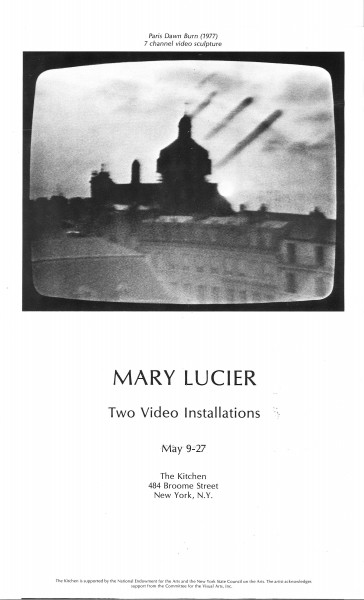 Two Video Installations consisted of Paris Dawn Burn (1977) and Lasering (1977-78). In the former, Lucier recorded seven thirty-minute videotapes of the sunrise over the Centre Pompidou. The videos were displayed on seven monitors set up in an arc. In each, the sun burned the surface of the camera’s vidicon tube, leaving a black arcing mark over the video. The piece juxtaposed video’s materiality and technical processes with the picturesque image of the sun rising in Paris. In Lasering, a laser was suspended above a recording camera, which likewise burned the vidicon tube and played back the result by way of a closed-circuit monitor. As minute changes in the room, such as vibrations and air currents, moved the laser, it patterned the image. Lasering explored video’s technical capabilities as a medium able to document otherwise imperceptible environmental changes in the space.