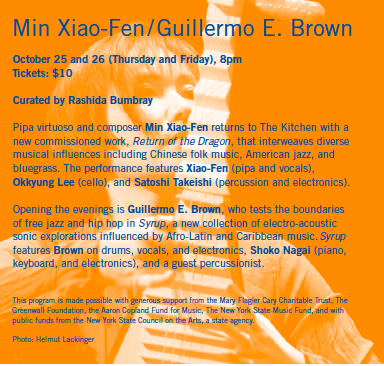 On October 25 and 26, 2007, The Kitchen presented two evenings of music by Min Xiao-Fen and Guillermo E. Brown curated by Rashida Bumbray. Xiao-Fen performed the newly commissioned piece Return of the Dragon, a musical work blending Chinese folk music, American jazz, and bluegrass. The work incorporated her own artwork of dragons, influenced by Chinese dragon iconography and calligraphy. She was accompanied by Okkyung Lee (cello) and Satoshi Takeishi (percussion and electronics). Brown opened for Xiao-Fen with a performance of Syrup, an electro-acoustic work with Afro-Latin and Caribbean musical influences. As the press release states, "Syrup, for Brown, is viscosity, and the propensity for connectedness—good and tragic, alike— through the flow of various materials, including music." Brown performed on drums, vocals, and electronics, accompanied by Shoko Nagai (piano, keyboard, and electronics) and percussionist Neil Ochoa.