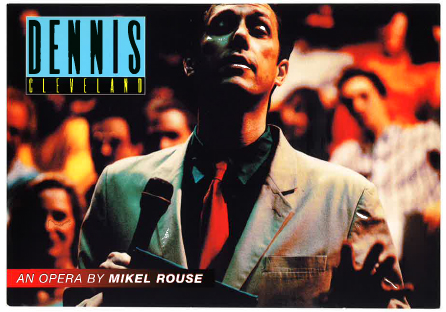 As the second opera in Mikel Rouse’s trilogy—also consisting of Failing Kansas (1995) and The End of Cinematics (1997)—Dennis Cleveland was a multimedia opera set on a television show in the late twentieth century. Modeled on the live-tape, talk show format, Rouse played the role of Dennis Cleveland, presenting himself as the host and provocateur, as well as the vehicle through which the story was told. Premiering at The Kitchen in 1996, Dennis Cleveland placed the audience and the stage under unrelenting studio lighting, while its inclusion of actors and trained singers in the audience offered a new way of looking at opera and contemporary pop culture.