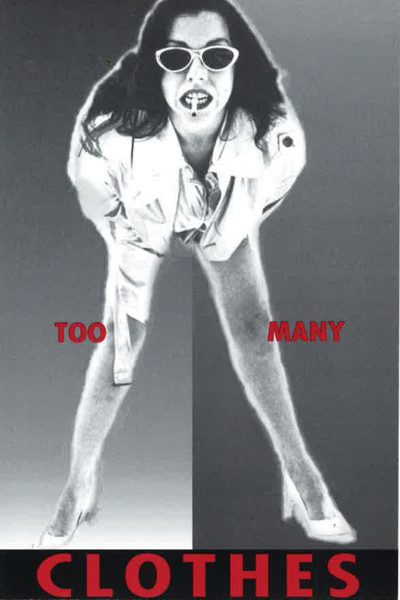 Too Many Clothes was a solo, multimedia theatrical work written and performed by Linda Hill that explored the relationship between clothing and personality by inviting audience to contribute their cast-off clothes. The characters Hill invented were as diverse as the clothes she collected from the audience, ranging from cowgirl to callgirl and included characters such as performance poet Negateeva, a truck stop waitress Nelda Brown, and Cynthia Brewster--a nouveau riche social climber who loved the homeless. Throughout the three days of the performance, Hill also held a child’s paper doll fashion show and aired video footage of various people’s closets in The Kitchen’s gallery, where piles of the donated clothing were also displayed. Meanwhile, a number of wearable clothing pieces were selected by set designer Matt Hausmann to create a hybrid of a Hollywood costume shop, an Upper West Side Boutique, and an East Village bohemian’s closet. The clothing that made up the set was later given to charity after the three-night engagement directed by Henry Caplan.