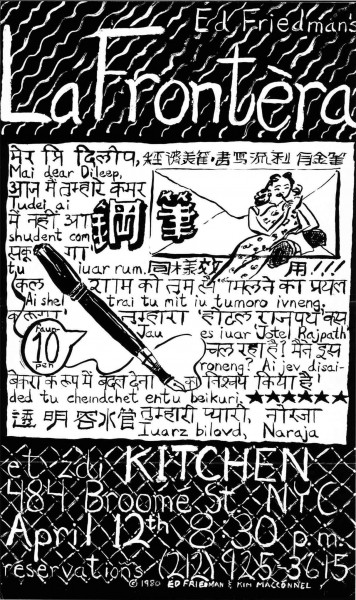 Ed Friedman presented two of his works—La Frontera and Space Stations—at  The Kitchen in 1980. In La Frontera, Ed Friedman taught grammatically incorrect English and dialect to a class of fifteen students. The class repeated words that were simultaneously being projected onto the wall, accompanied by Kim MacConnel’s drawings, as well as Mexican, American, and Indian pop and folk music. Space Stations represented the artist’s effort to record his daily actions, thoughts, and readings in the form of journal entries in order to experiment with how he could account for present time. The piece presented at The Kitchen featured the reading of the transcript of Apollo 13 astronauts’ in-flight communication as part of the journal. This performance demonstrated Friedman’s interest in introducing literature, and in particular books, as a new tool in the realm of performance art.