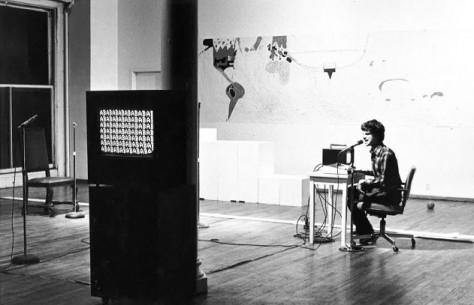 From writing to performance, Christopher Knowles submerged himself in verbal and visual manifestations of words, which served as the foundation of his experimental works. A Solo Piece was an original theatrical work composed and conducted by the New York-based artist. A Solo Piece was performed twice at The Kitchen; the first took place on May 4, 1976, whereas the second was on May 7, 1976. In addition to A Solo Piece, a text-based exhibition called A Typing Work Show featured Knowles’s poem/songs, typed designs and videotapes made on a character generator. Inviting viewer to explore communication and sign systems, A Typing Work Show was Knowles’s first exhibition at The Kitchen.