Yuka Honda is a New York-based multi-instrumentalist (piano, synthesizer, sampler and other keyboards) and composer best known for co-founding Cibo Matto with Miho Hatori in 1994. Born in Tokyo, Honda moved to New York in 1986 as a food writer and went on to form the band The Flaming Hoops in 1989 with Dougie Bowne and Marc Anthony Thompson, simultaneously playing with Jazz Passengers, the live hip-hop band Rhythm Method, and the funk band Brooklyn Funk Essentials. Honda met Hatori in 1993, and they formed Cibo Matto a year later, with Hatori singing all the songs about food and love, while Honda was the sole instrumentalist who utilized live electronics to make the sound of a full band. Cibo Matto has released three studio albums (Viva! La Woman (1996), Stereo ★ Type A (1999), and Hotel Valentine (2014)) as a duo. Honda has also collaborated with many other musicians including Sean Lennon, Vincent Gallo, Dave Douglas, Susie Ibarra, Petra Haden, and David Byrne. Honda performed at The Kitchen in “Synth Nights: Curated by Laurie Anderson” in 2013. 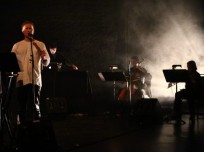