Thulani Davis (1949- ) is a scholar and writer working across a diverse array of literary media. Although best known for her written works, in particular 1959 and My Confederate Kinfolk, Davis has had an extensive and illustrious career in performance, delivering her poetry, directing both theater and film, and executing librettos for opera. Davis has been recognized for her provocative work by the NY Foundation for the Arts, State Council on the Arts, the Black Writers' Hall of Fame, and the Grammy Awards among many other noteworthy institutions. Davis first worked with The Kitchen in April 1981 as director for Jessica Hagedorn's Tenement Lover: (no palm trees/ in new york city) and Ntozake Shange's Mouths: A Daughter's Geography. Since, Davis had appeared numerous times both on stage and off for performance and film. 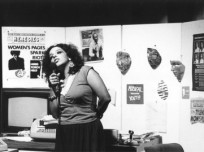