Ntozake Shange's (1948-2018) work has grown out of her childhood experiences of racism in the early years of de-segregated public schooling. Shange earned her undergraduate degree at Barnard College, where she met future collaborator Thulani Davis, and her master's degree in American Studies at the University of Southern California. Shange returned to New York City in 1975 at which time her celebrated piece, for colored girls who have considered suicide / when the rainbow is enuf, was produced. Shange has written numerous poems, plays, essays, and books, and has received the Guggenheim Fellowship and the Obie Award amongst many others. The Kitchen presented Shange's choreopoem Mouths: A Daughter's Geography alongside Jessica Hagedorn's play Tenement Lover in April 1981. 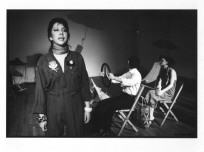