The Rock Steady Crew is an American b-boy crew founded in the Bronx in 1977 by Jimmy D and Jimmy Lee. It was later taken up in Manhattan by Crazy Legs, who continues to steward the group today. In the summer of 1981 the Rock Steady Crew performed at Lincoln Center Outdoors and they began to gain public notoriety. They performed at The Kitchen in October 1981. 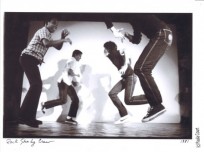