Robert Wilson (b. 1941) is a multidisciplinary artist well known for his opera and theater works. In each of his works Wilson finely crafts relationships between stark lighting, pedestrian movement, and minimal scenic design to create pieces that finely articulate his particular aesthetic. He began working in New York in the mid-1960s and founded his experimental performance company the Byrd Hoffman School of Byrds with which he created his first major works including The Life and Times of Sigmund Freud. Consistently expanding conceptions of theater, Wilson is perhaps best known for his collaboration with Phillip Glass and Lucinda Childs on the seminal opera, Einstein on the Beach. Throughout his career he has collaborated with leading artists across genres including Allen Ginsberg, Lou Reed, David Byrne, Laurie Anderson, Marina Abramovic, Willem Dafoe, Mikhail Baryshnikov, and Lady Gaga among others. Wilson also creates sculpture, drawings, and video works; and in 1993 he was received the Golden Lion prize at the Venice Biennale for his sculptural installation. He first performed his work A Spaceman at The Kitchen in in 1976 and went on to present work there throughout his career. For more information, please visit: http://www.robertwilson.com/ 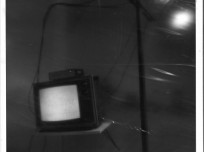