Olia Lialina is a pioneering net artist, experimental film critic and curator who lives and works in Moscow. Lialina seeks to collect, preserve and monumentalize the web culture of the 90’s. Her work contributes to critical digital culture, media literacy and the development of languages and dialects of New Media.. A co-founder of Geocities Research Institute, she writes for publications such as New Media, Digital Folklore and Vernacular Web. She is also a professor at Merz Akademie’s New Media pathway, which was one of the first institutions in Europe to educate Interaction Designers. In 1999, it was the first to offer an Internet Art and Web Design curriculum. My Boyfriend Came Back From The War is a 1996 work by Lina now considered a classic in internet art, appropriated and remixed by various other new media artists in many different forms. Additionally, Lialina was one of the founders, and later director, of Cine Fantom, an experimental cinema club in Moscow. In January 2017, Lialina was included in the exhibition of Asymmetrical Response with Cory Arcangel at The Kitchen. For more information please visit: http://art.teleportacia.org/ 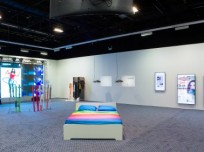