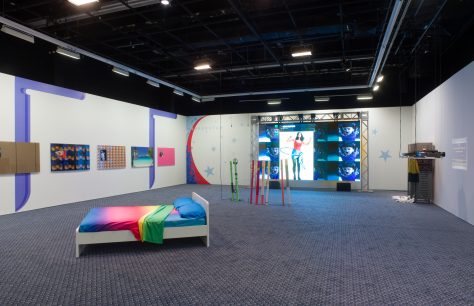 The exhibition Asymmetrical Response showed bodies of work by media artists Olia Lialina and Cory Arcangel, as well as some collaborative works, that explored a long-running aesthetic dialogue on the changing terms of the Internet. Navigating the social and cultural impact of the Internet’s historical shift from a tool for military communication to an “information superhighway,” the terms “asymmetrical” and “symmetrical” were used to describe a set of relations that define social and cultural connections to power in an investigation of contemporary media structures. Arcangel and Lialina’s works directly addressed the shaping of public discourses such as the USA presidential election—and, in turn, personal identity—through manipulated media and corporate limitation, in an installation in which multiple digital temporalities existed simultaneously. The exhibition transformed The Kitchen into a space where devices that chart a potted evolution of domestic entertainment (slide projectors, LCD games, curved flat-screens) were situated among a sea of colorful wall graphics and textiles. The exhibition was curated by Caitlin Jones for Western Front, Vancouver (where it appeared in fall 2016), and organized for The Kitchen by Tim Griffin and Lumi Tan.