Neal Medlyn is a performance artist based in New York City, who works across music, dance, and theater. His celebrated Pop Star Series—which drew on a series of musical artists including Miley Cyrus, Lionel Richie, and others—examines the cult of celebrity and popular culture. Medlyn also performs as rapper Champagne Jerry as part of his hip-hop project in collaboration with Max Tannone, Adam Horovitz, Kathleen Hanna, Bridge Everett, Carmine Covelli, and the Champagne Club among others. Medlyn also designs sound scores, and in 2010 won a New York Dance and Performance Award (“Bessie”) for his sound design for Miguel Gutierrez. Medlyn has appeared at The Kitchen regularly throughout his career, notably performing two pieces from his Pop Star Series at The Kitchen: Wicked Clown Love in 2012, and the final piece of the series, King, in 2013. He most recently appeared at The Kitchen as Champagne Jerry in December 2015. 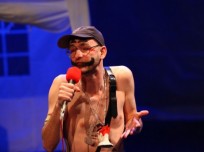