Miranda July is a filmmaker, artist, and writer. Her videos, performances, and web-based projects have been presented at sites such as the Museum of Modern Art, the Guggenheim Museum and in two Whitney Biennials. July wrote, directed and starred in her first feature-length film, Me and You and Everyone We Know (2005), which won a special jury prize at the Sundance Film Festival and four prizes at the Cannes Film Festival, including the Camera d’Or. Miranda July’s most recent film is The Future (2011), which she wrote and directed and stars in. In addition to her feature length films, July has performed extensively within the United States at venues such as The Kitchen, Portland Institute for Contemporary Art, the International Film Festival Rotterdam, the Institute of Contemporary Arts in London, and the Walker Art Center in Minneapolis. For more information please visit http://mirandajuly.com 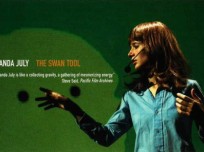