Kelvin James, also known by Kelvin Christopher James, is a Caribbean American novelist and short story writer who moved to the United States in the 1970s, receiving his MA and doctorate in education from Columbia University. Before becoming a full-time writer in 1980, he worked in the science education field. Throughout his career, he has written several novels, and in 1985, co-founded “A Literary Salon,” a reading series for emerging artists to present new work. In 1990, he presented a reading at The Kitchen, alongside Lynne Tillman. 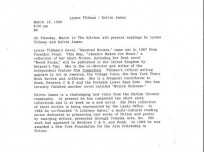