Born in Chicago, Illinois, in 1951, Joseph Nechvatal is a post-conceptual digital artist who creates computer-assisted paintings and computer animations, often using custom-created computer viruses. His work in the early 1980s chiefly consisted of postminimalist gray graphite drawings that were often photomechanically enlarged. He began using computers to make paintings in 1986 and later began to employ computer viruses. These collaborations with viral systems positioned his work as an early contribution to what is increasingly referred to as a post-human aesthetic. In 1999 Nechvatal developed his concept of viractualism that seeks to create an intersection between the biological and the technological, which, according to the artist, creates a new topological space. In 2002 Nechvatal worked in collaboration with the programmer Stephane Sikora to explore artificial life in attempts to merge virtual reality and artificial life. Sikora’s virus invades, destroys, and transforms Nechvatal’s painterly images, and Nechvatal believes this gives the work a “digital clarity” true to our contemporary age. Nechvatal’s work was shown in a solo exhibition entitled When Things Get Rough on Easy Street at The Kitchen in 1982. For more information please visit http://www.eyewithwings.net/nechvatal/index2.html 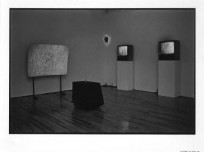