Johanna Boyce was an American choreographer known for her choreography that celebrated a diverse range of performers that included many with little or no formal dance training. Boyce was one of the inaugural artists in The Kitchen's Dance Now program in 1979 and went on to present other works throughout her career including Out of the Ordinary (1980) and Accidents of Nature (1984). Boyce also created a series of films in collaboration with the American artist Joseph Schabel, two of which (A Weekend Spent Filming and Bombshells) were shown at The Kitchen. 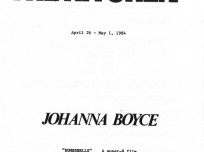