Jean Genet (1910 – 1986) was a French writer and activist who was based primarily in Europe during his lifetime. In his early life Genet spent considerable time in detention and the military for delinquency and vagrancy –experiences that he would frequently draw from throughout his extensive body of work, which includes several novels, plays and poems. Genet began writing while in prison in 1937 and gained public prominence after Jean Cocteau helped to get his first novel, Notre Dame Des Fleurs (Our Lady of the Flowers), published in 1943. Genet’s work was the subject of analysis by Jean-Paul Sartre and Jacques Derrida and gained popular and critical support, with a number of his plays performed on Broadway and adapted into films in the 1960s. In the late 1960s Genet became politically active and fought for immigrant rights in France, lectured in the United States on the invitation of the Black Panthers and spent time in Palestinian refugee camps in 1970, experiences which all informed his posthumously published novel Un Captif Amoureux (Prisoner of Love). Genet’s only film Un Chant d’Amour (1950), which focused on the fantasies of a prison warden and a gay male prisoner, was screened at The Kitchen in 1983. 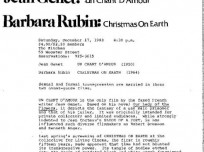