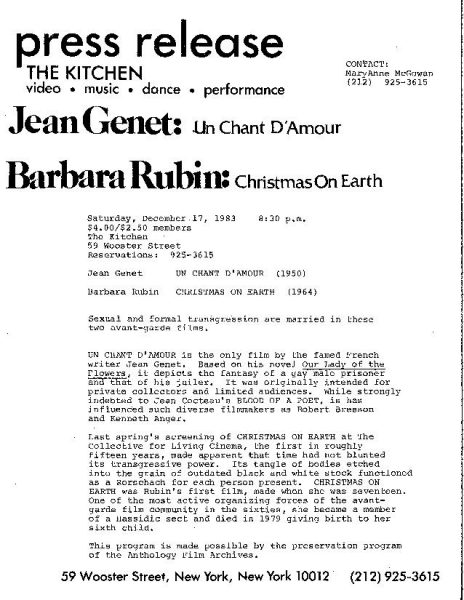 This film screening contained two works that evinced both formal and sexual transgressions in avant-garde film. Un Chant d’Amour (A Song of Love, 1950) was a twenty-six-minute black-and-white film, made by the French writer and activist Jean Genet, depicting the fantasies of a gay male prisoner and his prison officer. The film courted considerable controversy when it was first released due to its subject matter and explicit content, but it has since come to be recognized as a milestone in portraying gay sexuality and passion on film, and it has influenced a wide breadth of filmmakers. Although the film was originally intended for exclusive audiences and private collectors, it received a public screening at The Kitchen as part of this double-bill alongside Christmas on Earth (1964), the first film by the avant-garde filmmaker and performance artist Barbara Rubin. Christmas on Earth (1964) contained twenty-nine minutes of similarly sexually explicit footage—various performers painted or in masks engaged in sexual acts—which Rubin sliced and reconfigured considerably before separating the footage onto two reels and superimposing one projection over another.