American conceptual artists Brennan Gerard and Ryan Kelly have collaborated as Gerard & Kelly since 2003, involving dance and performance in their practice. Driven by an inquiry of their own partnership, the two explore themes of queer consciousness and collective memory through interdisciplinary frameworks. Their work Timelining was shown at The Kitchen in 2014. 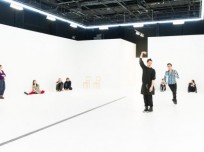