Earl Howard is an avant-garde composer known for his music for live electronics, particularly for the saxophone. His works often combine electronically orchestrated sound with improvisational performance to create a densely layered composition. He has performed with Anthony Davis, Gerry Hemingway, Mark Dresser, George Lewis, and many other prominent musicians. Howard has performed at The Kitchen throughout his career, notably in a programs of Ensemble Works in 1981 and 1983. 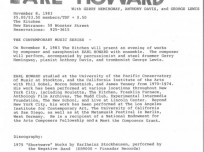