Cristina Gómez Barrio and Wolfgang Mayer have headed Discoteca Flaming Star since 1998. In their own words, they have described Discoteca Flaming Star as “an interdisciplinary collaborative art group, a group of people which uses songs and other forms of oral expression, understanding them as a personal response to historical events and social and political facts.” Their work spans sound, performance, and installation confronting the stability of public memory, and addressing topics including love, consumption, fervor and feminism, the nature of documentation, and articulation. They also touch upon knowledge or a lackthereof, and explore the wide and rich iconographic history of contemporary culture, drawing inspiration from things as seemingly disparate as Warhol’s wig and the Vienna Group. They have performed and exhibited widely, showing internationally at the Museo Tamayo, Mexico City and Berlin’s Gallery September. Their work at The Kitchen exhibition The Rehearsal in 2014 continued their exploration of the social and political ramifications of historical events. 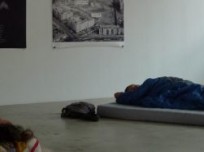