David Weinstein is an American keyboardist and composer. Weinstein works with various kinds of synthesized and pre-recorded sounds ranging from noises to words combined with more traditional instruments and sounds. Weinstein is also known for incorporating computer assisted audio and animation with his music and performance. Weinstein first performed at the Kitchen in 1992 as part of The (R)evolutionary Keyboard music series. 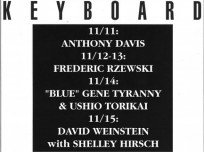