Amiri Baraka was an African American poet, playwright, and author. Through his poetry, dramas, fiction, music criticism, and essays he spoke out against racism, at times shocking his audience with the confrontational nature of his work. His career began in the 1950s with Beat poets including Allen Ginsberg, Jack Kerouac, and Frank O’Hara. He was an important figure in the Civil Rights Movement during the sixties, particularly in Newark, NJ through his commitment to African American arts and politics. In 1981 two of Baraka’s plays, The Dim’ Crackr Party Convention and Weimar 2 were performed at The Kitchen. For more information about Amiri Baraka, see http://www.amiribaraka.com/. 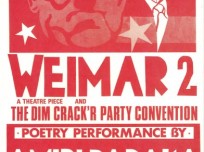