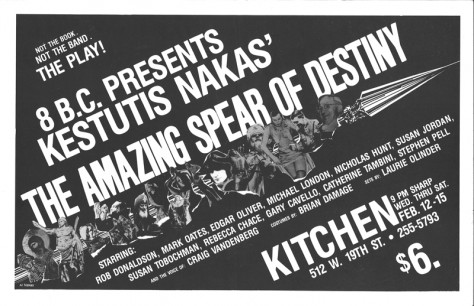 On February 12-15 1986, 8BC Nights: Four Nights of Theater, Performance and Music took place at The Kitchen. This event included performances by Kestutis Nakas, Karen Finley, Jo Andres, Live Skull, The Wayfarers, James Seina & Chazz Dean, Ellen Fischer, Ethyl Eichelberger, They Might be Giants, His Master’s Voice, Alien Comic as MC, and more. 8BC Nights was named after a cabaret called “8BC,” which presented the work of emerging artists to a downtown audience, and existed from 1983–1985 until NYC zoning regulations closed it down.