Ingrid Sischy (1952-2015) was an artist and writer. She served as the editor of Artforum from 1979-1988 and during her tenure covered the rise of the East Village art scene, the growing importance of Germany and Central Europe, and new group of artists dubbed the Pictures Generation. She was later the editor of Interview Magazine from 1989-1999, during which she increasingly covered popular culture, fashion, music, and photography in addition to visual art. Sischy also regularly wrote for the New Yorker and worked as a contributing editor for Vanity Fair until her death. Sischy curated the exhibition Pictures Lie at The Kitchen in 1981 and also appeared here that spring as part of the DISBAND, an all-girl band composed of artists. 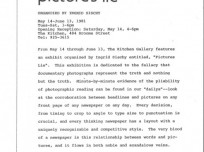