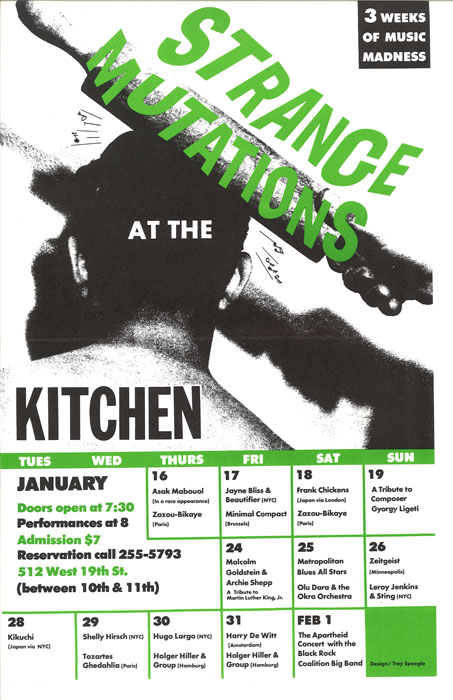 Strange Mutations was a three-week long series of international, exploratory music that aimed to question ideas about what “new music” meant and to present a variety of previously unseen experimental artists from abroad and New York City. This series was the first programmed by music director Bob Wisdom, and it was the inaugural music series at The Kitchen’s new space in Chelsea. The first week involved a number of acts from Europe, many of whom were associated with the Belgian record label Crammed Discs, as well as a tribute night to the Hungarian-Austrian contemporary classical composer György Ligeti, which included the world premier of a new piano work by the pianist and composer Yvar Mikhashoff. The second week included a tribute to Martin Luther King Jr. by the violinist and composer Malcolm Goldstein and saxophonist Archie Shepp. During the third week there were performances by an assortment of Europe-based acts as well as a concert by the American music collective Black Rock Coalition titled "The Apartheid Concert." The program for that event signaled an anti-apartheid stance. The cover features an image of P.W. Botha, the State President of South Africa at the time who upheld apartheid policies, and includes a Swastika overlaid on his face, calling attention to his affiliation with Nazi party sympathizers during World War II.