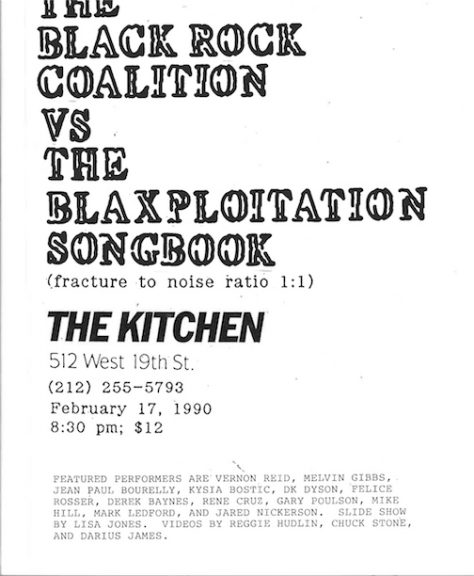 This event was the first of two performances in 1990 by the Black Rock Coalition, a non-profit collective formed in 1985 to support the work and creative autonomy of black musicians, who held their Fifth Anniversary Concert at The Kitchen in November later that year. For “The Black Rock Coalition Versus The Blaxploitation Songbook” a variety of musical ensembles made up of members of the collective performed theme songs and soundtracks from a number of Blaxploitation films, a genre that had emerged in the early 1970s that is credited with contributing to the reconceptualisation of race relations in America through its foregrounding of black actors, concerns, and experiences. The event, which took place under the creative direction of Black Rock Coalition founders Greg Tate and Melvin Gibbs, was conceived as a tribute to this underrecognized body of work. The films from which the music was taken included “Superfly” (1972), “Trouble Man” (1972) and “Black Caesar” (1973) and tracks by musicians such as Curtis Mayfield, James Brown and Jimmy Cliff were featured. The lineup of musicians included Vernon Reid, Felice Rosser and Mark Ledford among many others. The event also included slides from the journalist Lisa Jones and videos by the filmmaker Reggie Hudlin, the writer Chuck Stone and the author and performance artist Darius James.