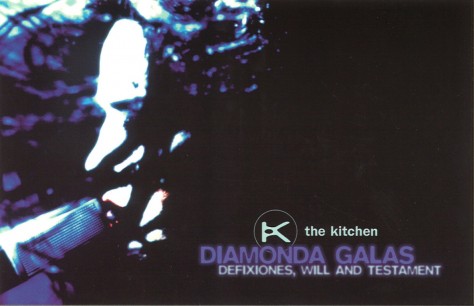 For three evenings—December 1, 2, 4, 1999, The Kitchen presented a preview of Diamanda Galas’s new song cycle for voice and piano, Defixiones, Will and Testament.

Galas put music to texts by Armenian poet Siamanto, Belgian/French poet Henry Michaux, and Syrian/Lebanese poet Adonis. The piece involved a unique musical interpretation of the rembetika songs of Sotiria Bellou, the Anatolian Greek Amanedhes, the blues of Blind Willie Johnson and Son House, and the sacred songs of the Deep South.

As stated in the event’s program, “the work is concerned with the poet living in exile” and it speaks for those unjustly imprisoned, outlawed, or exterminated for their religious beliefs. The performance was “dedicated to the forgotten and erased of the Armenian and Anatolian Greek genocide of 1915 and 1922.”