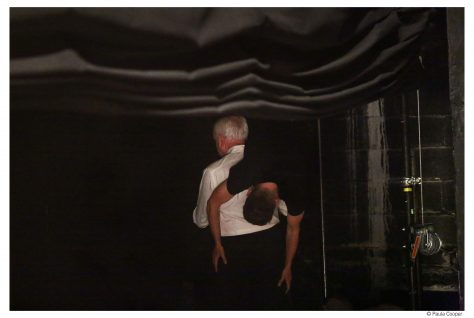 Yve Laris Cohen presented his performance Fine at The Kitchen on the evenings of May 14–16, 2015. The title, pronounced “fee-nay,” is derived from the musical notation al Fine, marking a composition’s conclusion. The performance itself, however, reflects upon a project never realized. Laris Cohen stands before the audience dressed as a stagehand, clipboard in hand, and converses with various characters around the theater space. Speaking through a microphone headset, he interviews each of them about a failed project, the reasons for its failure, and their various contributions. This project, as the audience learns, was a performance intended to take place on a sprung dance floor, raked at an angle that would increase gradually throughout the performance, eventually pushing the audience out of the theater.  In staging Fine, Laris Cohen chose to remove all chairs from The Kitchen's blackbox theater and segment the space with curtains, which were periodically raised and lowered throughout the show. Consequently, as Laris Cohen's dialogues progressed, audience members could feel as if they were also onstage.